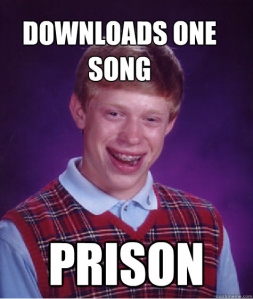 I think I’m addicted to this meme because, in all honesty, it makes me feel a little better about the things in my own life. Sucks for HIM. It’s also just really tragically funny.

Don’t get me wrong, I love writing about the mishaps and unfortunate moments in my life. It’s not just some way to cope, but I actually feel that God wants me to share it to remind people that He created humor and that He’s the funniest of them all. I like to believe that God’s other option besides the flood was to do a stand-up routine to all of humanity, where they would just all die of laughter. Noah’s family and the chosen animals would just have worn camel-hair earplugs.

So here’s three things that happened recently for “God Likes to Prank Amy”:

1. Basketball Trouble
I went to the park to play basketball on Sunday because of the unusually warm weather in Madison. I was excited the other half of the court was open, so I took out my freshly pumped ball and shot a jumper right outside the key. Feeling good about my first one landing right in, I immediately ran to get my rebound and wondered where the ball went. I looked up in dismay–it was stuck in the net made of chains. I pathetically jumped a few times thinking some force might pop it right out. But my sad lack of height and air did no good. The nice kids on the other side saw my dilemma and immediately came to my rescue. A 10 year-old boy, with all his might, threw his ball right at mine in the net. The ball ricocheted so hard that it hit me right in the face and I fell back into a huge puddle. 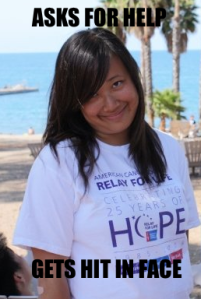 2. Water Damage
I came into the office on Tuesday to find that a portion of our department got flooded due to a pipe backing up from the building near us. The strangest thing is that it could have backed up and burst at any place in our large building. Any office, any room, any square foot of space. It, of course, flooded the room where I was editing my project.

3. Venison
Last month, I was able to do a weekend in Chicago with my visiting friend Stacey, and our other friend Julie, who goes to law school there. On the way there, I discovered that roadkill in the Midwest is actually something to be reckoned with. We literally counted about five dead deer who sadly got bulldozed by speeding cars on the freeway. Most of them were fairly easy to avoid. But in one particular case, the genius car in front of me became lazy and just ran over the already deceased animal, causing chunks of now-venison-meat to fly in the air and splatter on the hood of my car. I left it to dry for about two weeks and eventually just used my shoe to scrape it off with relative ease.