Taking out the trash is never fun. When you tie up that big bag of unwanted goods, the smells of a few days’ debris just slaps you in the face. It’s not particularly fun to leave a full trash can sitting overnight. Therefore, most people complete the chore of heading to the dumpster in the evening. And it is always creepy. I have learned to enter the dark abyss (a.k.a. my apartment complex parking lot) slowly and cautiously. The trash bin is literally about 30 feet from the building entrance, but after all the crime shows I watch, anything can friggin’ happen.

And about two weeks ago, something did: I met my nemesis.

My roommate Laura was gone for ten days, so I was on extra high alert. It was just a typical Tuesday night, and the odor from our kitchen waste bin needed to GTFO. I went outside with my pepper spray, scanning left and right. The area was clear for travel. So I took a deep breath and scurried to the dumpster. As I tossed the heavy load into the bin, I felt a sigh of relief. But that didn’t last long when a huge raccoon jumped out and I screamed. If I had been about 6 inches closer, I probably would have had to make an appointment for a rabies exam.

The dumpster has been claimed. Bandit Eyes rules the wasteland. 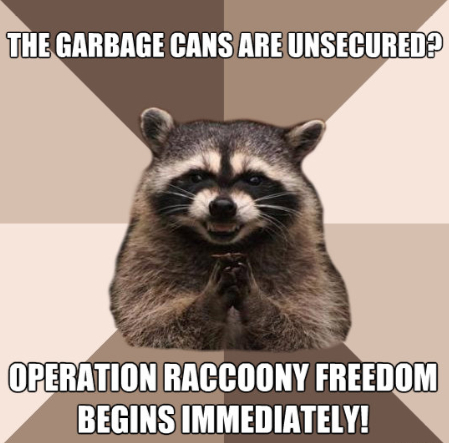 I’ve seen Bandit Eyes quite a few times since that frightening day, and I always stare (from behind my car like a complete weirdo), thinking angry thoughts. Who does this guy think he is? This fat and furry creature just takes and takes. You don’t see me jumping out of a tree nest and scaring you. Yeah yeah, human beings have forced you and your raccoon kind to depend on urban environments. But you’re still annoying.

Yesterday, Bandit Eyes brought a buddy of his. It was about 1015pm, and so my camera phone couldn’t capture the two at the buffet well. But here’s a security-camera-like photo for you to identify the perpetrators:

We had about a 30 second stare down, and they won. My zoophobia kicked and I realized what I was doing. I wish my grandma was here because she’s an expert at trapping animals with homemade devices. But then again, she also cooks them. Hm…so maybe not.

I have resorted to taking the trash out in the daylight, and making lots of noise before I enter the premises of refuse. I fear that Bandit Eyes’ new companion is female, and that they will reproduce offspring for takeover. My window faces them, and I can hear them plotting through the night. I pray that I will live to tell the tale.