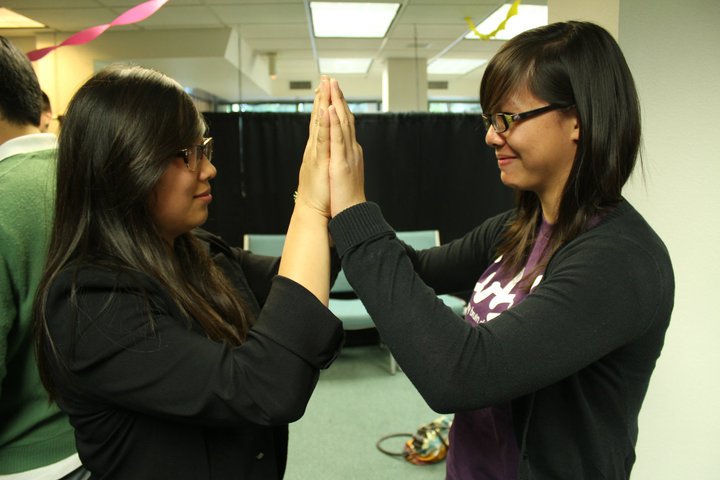 This post is dedicated to my dear friend Rachelle Wong, who I and many others lost recently. Though I am still in the midst of much grief and sadness, I’m ready to celebrate the woman she was and is to me. I want to share with everyone how much she has impacted me, even in the midst of my mourning.

You might be wondering, why would I choose to use my ridiculous and humor-motivated blog to honor such an amazing young woman? If you know her, she too, was just as a ridiculous and funny as the nature of my blog. It’s almost too perfect.

I desire to spend this entry sharing just how quirky she was, and somewhat selfishly in relation to me. I met Rachelle when I was on staff with InterVarsity Christian Fellowship at UCLA, and it was seriously love at first banter. She has become my “grand protege,” my “mini-me,” and one of my dearest friends. I love her and miss her more than anything right now.

Our first road trip together where we got to bond even more and visit Jessi in San Diego:

Five Things I Will Most About Rachelle

1. Hearing Her Obnoxiously Loud Voice From Anywhere Within a 300-Foot Radius
I didn’t think there were many people that could be much louder and talkative than I in large group contexts. And then I met Rachelle.

Rachelle has a way of coming into a room and drawing a million people to her. I was one of those people when I first met her at my apartment after an InterVarsity event. We had hit it off by agreeing on something probably pop culture related, and I still remember the first thing she said to me: “I like you. I think we’re going to be friends.” I like to think that was evidence for words to be prophetic.

I’ll miss hearing “Grandma!” from across a room of 200 people, followed by a grabbing of both my gluteus and facial cheeks.

2. One More Person to Be Confused With
I mean, look at her: You cannot deny that my physical appearance captures the essence of “Rachelle Wong” and vice versa. But our personalities and way of speaking are creepily similar too. We’ll suddenly talk in an accent (our favorite being the Jewish New-Yorker), be way verbose, and do a Michael Cera-esque subtle additions to our sentences while we trail off and leave people very confused (see what I mean?). Most people have commented on our conversations’ weird nature, but I always found it beautifully comforting and hilarious.

From this, you can see why Rachelle is known to be my mini-me and grand protege. Grand protege came around because one of my closest friends, Jessi Johnson, was deemed my protege, and Rachelle was Jessi’s. And using generational and familial math, I then became her “grand protegee,” (and sometimes grandma for short). I’m sure this all sounds very childish and strange, but it was a special relationship that I cherish and love. And of course, in all honesty, it was an excuse to be obnoxious around others. I’ll miss when the three of us get together and make the world our stage.

Jessi and I waking up Rachelle from a sleepover: A Different Kind of Parenting

3. Her Undying Devotion and Loyalty to Everyone She Cared For
Rachelle’s loyalty to her loved ones was one of her most admirable qualities. She would sacrifice constantly to make sure her friends’ needs were met, destroy anyone who would mess with us, and make time for us despite her chaotic schedule. A classic example of this was when I asked her to pick me up from LAX. On the way back from the airport, she told me nonchalantly that she had been literally driving since 9am that morning. It was 9pm when she picked me up, and she had been driving her gas-guzzling Pacifica all over the Greater Los Angeles area giving rides to people, including already being at the airport twice that day. That to me was one of the best examples of sacrificial and loyal friendship I had encountered. I was so proud and honored to be on the receiving end, and I hope that I was even a tiny ounce of that for her.

Despite having finals and a ton of work, her and I went to visit Jessi when she was at UCSD for grad school. I’m going to miss her laugh:

And during Halloween, she was even willing to pretend to be a Hong Kong exchange student with a brilliant British accent, I was a mainland Chinese international student named Ming, and Jessi was our American host. Despite us being horrible young adults running around an L.A. neighborhood and deceiving folks to get candy, it was one of the most memorable nights of my life. We encountered the strangest of folks, including being invited into the home of a middle-aged man in a blue onesie, claiming to be “Thing 1” from Dr. Seuss. I’d like to think he gave off more of a “The Thing” vibe to me (word play!). Our acting skills were rewarded with a small bucketful of treats (we gave the tricks!), telling people door-to-door that this was my first Halloween as a foreigner. Rachelle stuck it through the whole way, and made sure we got our fill. That is what true friendship is–willing to be a complete fool to make each other happy.

Here’s an example of our shenanigans (though we don’t get to see Rachelle in action, she’s holding the camera and calls it our “walk of shame.” Spot on.):

4. Her Freakishly Incredible Amount of Body Strength From All the Protein She Consumes

If there’s one thing I’m certain about in life, it’s that Rachelle loved meat. If you didn’t think all-you-can-eat Korean BBQ is worth it, you would have brought Rachelle along. She robbed those poor business owners of their profits in one sitting. Now I know this because this is actually one of our shared passions. I have had the pleasure of indulging in multiple one-on-one “S.L.U.T.” (Steak Lovers Unite Together) nights with her and we always manage to finish an entire steak on our own. If you know me, you know I love cooking and steak is my specialty. And with Rachelle’s love for meat, these fun dinners of catching up, being ridiculous, and “beefing up” our bodies were a match made in heaven.

This has to be the only explanation I can think of for why she is so freakishly strong. I’m a hefty, stocky girl who grew up doing manual labor and played various sports. But when we were wrestling once on a grassy area (I can explain…), she literally picked me up and threw me. That’s only ever happened to me with a 6′ 3” Latino boy in middle school when we were playing football in P.E. and he mistook me for his friend. I need not go further as to how sad that is. But all to say, Rachelle was probably stronger than half the guys I know. And so being on her good side was always a plus.

5. Her Incredible Talents and Skills at a Million Things
Acting. Filmmaking. Kendo. Drums. Improv. Wit. This girl could do just about anything (except be vegan for two minutes). She has impacted the lives of many as she allowed herself to be passionate about things, and let her talents come forth. I’m proud as hell of her. ‘Nuff said.

So proud after one of Rachelle’s many amazing LCC performances. She was all dolled up for this one and I couldn’t resist pinching her cheeks. She was obviously unamused (though we knew she loved it).

If I had even just five more minutes with Rachelle, I’d probably spend it having the world’s finest steak ready for the both us, listening to our favorite Explosions in the Sky album on vinyl, and talking in a million accents about nothing. 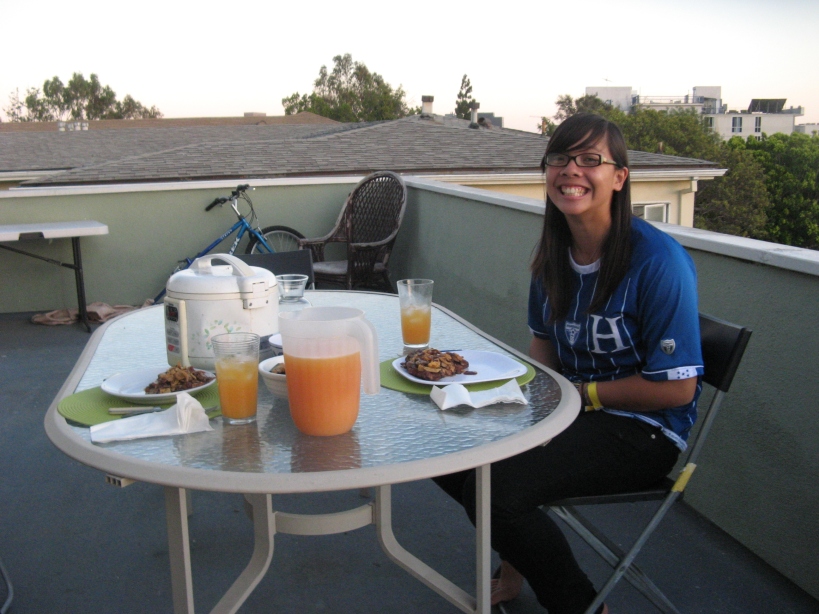