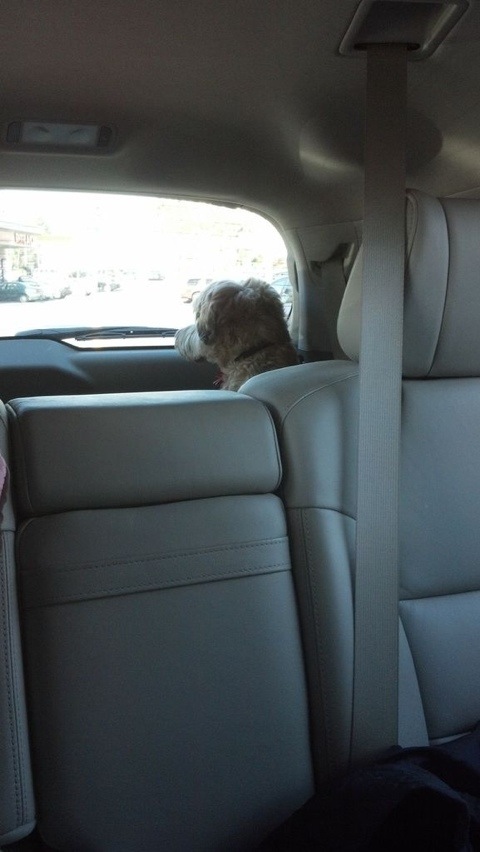 A few weeks ago, my boss was running late to work. He had misplaced his keys for the store and had to go all the way back home after halfway to his destination. Poor guy. But that meant it gave me time to get a cup of coffee and wait outside until he came to open up the postal store.

As I was waiting, one of our regular customers, Mrs. Hornwood, pulled up in her SUV and noticed my awkwardly standing outside instead of greeting her behind the counter. I updated her on the situation and she invited me to wait inside the car with her. It was a nice gesture, but certainly an interesting position for me to be in. I couldn’t say no, as my alternative would have been to stand right in front of her car while she sat inside it, and for us to pretend to not notice each other.

After about 5 minutes of small talk, she told me she needed to run to the Vons next door and use the ladies room. She stepped out and instructed me to just take the keys from the ignition if my boss Mike got here before she came.

But after ten seconds, she realized she forget to mention one last thing and pokes her head back into the window:

“Oh yeah Amy, don’t be alarmed but my dog is in the trunk bed. Okay, see you in a few.”

O_O This was my face for literally two minutes before I mustered up the courage to turnaround.

When I finally decided to do so after my initial frozen state of fear, there he was, just staring at me, salivating, breathing, ready to eat me and let my death be in the headlines of the LA Times: "25 Year-Old Becomes Chinese Take-Out for Elderly Woman's Dog."

It was the longest ten minutes of my life. I snapped photographic evidence when the beast finally turned around due to a honking horn:

I was waiting for the Fear Factor cameras to roll in and tell me I won $10,000. But no, my life is not a game show. This is simply my fate.